120 Buddhist leaders of every color and tradition joined together at last weeks’ White House Buddhist gathering. On a fine spring day there converged orange robed Lao and Taiwanese Abbots, well-known American born leaders, senior monks and nuns, lamas and Zen masters. Organized by a leadership group led by William Aiken of George Washington University, our purpose was to bring the Buddhist voice of wisdom and compassion to the policies of our government.

Compelling presentations showed how almost every Buddhist community there had developed compassionate projects, outreach and activism: serving from Haiti to Nepal, helping from prisons to impoverished city schools, working to support social justice and strengthen environmental care. We presented the White House and State Department staff with strong letters of concern on Climate Change, Racial Justice and spoke on the problems of the Rohingya, which I will write about more shortly. There was a joyful yet sober mood….daunting problems met with the camaraderie of brothers and sisters across the Dharma world … working together to offer our love and our resolve.

Giving the concluding address, I was able to remind the group of our history…that the Buddha regularly met with and taught Kings and Princes, ministers and wealthy leaders. He actively worked to stop wars and promoted social justice among all classes and races and castes. In fact, were he alive he would have visited the White House – and that he was there now in the Dharma that we all carried. 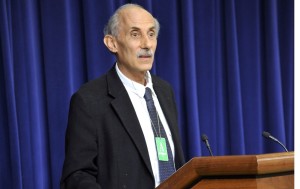 Sutras and texts recount many of Buddha’s teachings on Just Society: “As long as a society meets regularly in harmony and respect, follows the tradition of the wisest elders, protects women and children and other vulnerable members, cares for the natural world around them, fosters economic well-being and develops personal mindfulness and lovingkindness can they be expected to prosper and not decline.”  These teachings were true 2,600 years ago and remain true today.

Often we have colluded in allowing Buddhism and ourselves to be misrepresented as meditative naval gazers primarily concerned with inner life. But Buddhist teachings are always expressed by Wisdom, Compassion and Right Action. This is a powerful and beautiful heritage and we are called to celebrate and embody it.

In Zen they say it simply: “There are only two things: You sit and you sweep the garden.”

The compassionate wisdom of interdependence, virtue and generosity we carry is not for Buddhists alone. It is part of the spiritual medicine needed to balance our wild outer technological development, which on its own will not end war, racism and ecological destruction.  Humanity needs to balance the outer with an equal development of wisdom and compassion.

It is an honor to be a part of a broad community of beings who understand this and serve in so many forms, from gathering at the White House to sweeping the gardens across our whole sacred world.

You have Successfully Subscribed!